There are so many reasons you’ll fall in love with a Chihuahua. They’re clever and loyal, they have such expressive eyes, and they love to play and cuddle. But are Chihuahuas dangerous? 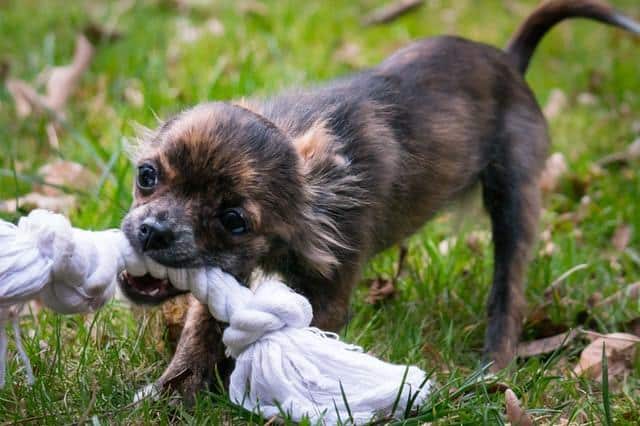 Chihuahuas get a bad rap for being “little ankle biters.” They’re sometimes called “Mexican pit bulls” because they can act fiercely and become aggressive when encountering unfamiliar people and other animals. But do these diminutive dogs pose a danger to you and your household?

If you’re thinking of getting a Chihuahua pup, you need to know what you’re getting into. If you already have a Chihuahua and want to keep your beloved pooch out of trouble, you need to learn how to teach him to be non-aggressive. Read on for our top tips on handling a Chihuahua.

While these devoted pups are one of the most popular dog breeds in the world, they don’t have a good reputation with some. You’ve probably heard Chihuahuas being referred to as “mean” and “yappy.” Some people think they’re “bratty” and “vicious.”

Some people automatically assume that small dogs are more aggressive than larger breeds and that these tiny dogs are all biters. According to HuffPost, these negative assumptions give Chihuahuas and dogs that look like them a bad reputation, which leads people to pass them up in shelters.

But the truth is, Chihuahuas aren’t any more predisposed to aggression than other dogs. While any dog can become aggressive towards humans and other animals, aggression is not a trait that you should expect in a Chihuahua.

In fact, Chihuahuas don’t really have a defined personality. They can be loving and affectionate or cunning and mean. Their behavior depends largely on their upbringing and training.

What’s true, though, for most Chihuahuas is that these dogs are highly intelligent, curious, and observant. These qualities make them a joy to train. However, they also have an independent streak, which means you’ll have to tap into your domineering side to get them to yield to you.

Why do Chihuahuas become aggressive?

This is the most common reason for aggression in Chihuahuas. When a Chihuahua is scared, he may react by barking, growling, yapping, snapping, or showing his teeth. He does this to try to scare away the person or animal he perceives as a threat.

Some people think it’s funny when they try to provoke their Chihuahuas into growling, yapping, or snapping at them. You’ll see many pet owners doing this on YouTube. It’s neither funny nor cute. These owners are only causing aggression in a dog that may not have been naturally aggressive.

Chihuahuas are prone to “small dog syndrome,” which is when a small breed thinks of itself as a large dog. Despite its size and the fact that there may be bigger dogs in the household, Chihuahuas tend to think of themselves as the leaders of the pack. They will stand up to humans and larger dogs, thinking that they need to defend their pack or their territory.

Sometimes, the reason a Chihuahua acts aggressively is that he’s in some type of pain. A dog that is injured or ill can become restless and anxious. He may growl, nip, or bite because he feels physically vulnerable.

If your Chihuahua is being uncharacteristically aggressive, bring him to the vet to rule out the possibility that he’s acting out because he’s in pain.

Tips for preventing aggression in your Chihuahua

Being “purse dogs,” Chihuahuas are used to being carried. But being constantly lifted off the ground deprives your Chihuahua of the chance to interact with other animals. This will lead to your pup becoming anti-social, fearful of strangers, and aggressive.

Knowing how to respond to basic commands is crucial. One of the first things you need to do to turn your Chihuahua into a well-mannered pet is to get him to obey the commands “sit,” “stay,” “hush,” and “come.”

Whenever your pooch gets a new command right or is able to follow an order, praise him enthusiastically or give him a treat. Chihuahuas are sensitive animals that don’t respond well to threats, physical punishment, and scolding. If he does something wrong, don’t yell or hit; just say “no” in a firm but calm tone.

Neutering your male Chihuahua helps prevent the development of certain diseases, including cancer. It can also make him less aggressive. The best age to neuter a dog is between 4 and 7 months.

Chihuahuas are lovable little goofs that make ideal companions and family pets, but are Chihuahuas dangerous? Despite their reputation as mean, yappy dogs, there’s really no need to fear these pint-sized creatures. Train your Chihuahua to be a good boy, and he’ll be just that.