When you have a pet dog such as a boxer, it’s vital that you look after its health. Dogs can exhibit a lot of symptoms if they are not feeling well. You might notice that sometimes your dog looks like he’s choking, but he’s not.

A good pet owner will take the time to learn more about their pet’s breed. Boxer dogs have their own temperament and characteristics. Knowing these that can help you understand their attitude better.

If a boxer dog acts like it is choking, is it something serious? There is actually a condition known as paroxysmal respiration also known as reverse sneezing. It’s one of the most common phenomena that affects dogs that have flat faces and short snouts.

Reverse Sneezing in Dogs and What You Need to Know

Reverse sneezing is a condition in dogs wherein they pull air into their nose in a rapid manner. This is in reverse to a normal sneeze where the air gets pushed out of the nose. It could look like the dogs are trying to breathe in while stifling a sneeze.

If you haven’t encountered reverse sneezing before, it can alarm you. Many pet parents jump into conclusions and start panicking. It can help when you’re familiar with the symptoms of reverse sneezing and how you can stop it from continuing.

Is Reverse Sneezing Harmful to Dogs?

Reverse sneezing is harmless, and it’s a common occurrence like when a normal sneeze happens. This is usually triggered by an allergen or irritant that gets inhaled by the dog. 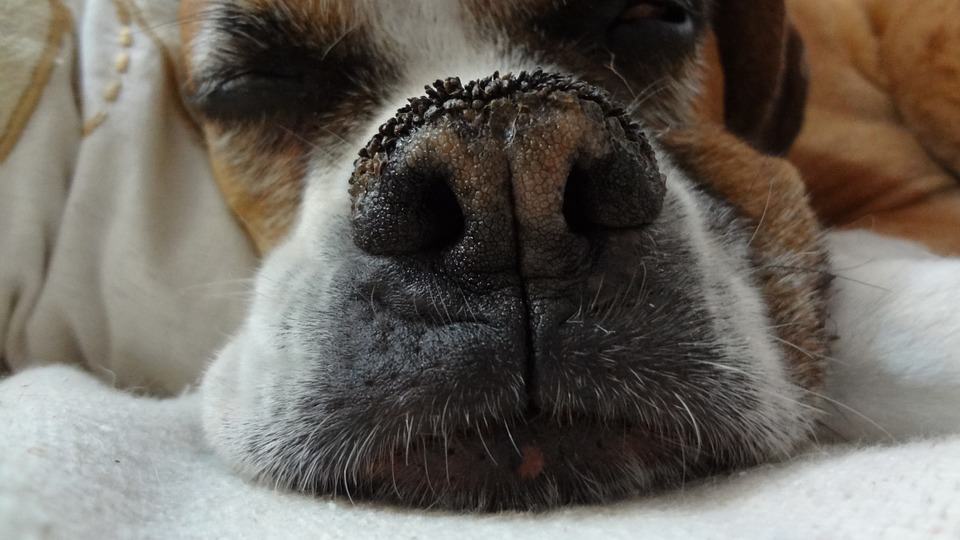 Episodes like these last for a few seconds and, in some cases, minutes. As the owner, you need to be calm and collected since the sneeze sounds scarier than it actually is. Smaller dogs even experience this more than bigger dogs.

Smaller dogs have a hard time pushing out irritants from their windpipes. For flat-faced dogs, their elongated soft palates catch irritants at the throat.

How Would You Recognize a Reverse Sneeze as It Happens?

What makes a reverse sneeze different from a regular sneeze? When you start hearing that snorting sound, it might be a sign that something is wrong. The dog will then inhale again and again as if he’s trying to push something from the back of his throat toward his nose.

Causes of Reverse Sneezing in Dogs

What should you check when your boxer dog acts like he is choking? As mentioned above, reverse sneezing is being triggered by allergens. The exact cause is still unknown. Causes can also be irritation of the sinuses, the nose, and can even be at the back of the throat.

The irritants can range from foreign bodies like seeds, grasses, pollen, odors, and more. Irritants can also be nasal mites, secretions, and having an elongated soft palate.

This is why dogs that have narrow nasal passages fall victim to this phenomenon. It’s common for boxer dogs so you don’t have to worry every time you see your dog sneezing like this.

Can Reverse Sneezing Stem from a Boxer Dog’s Health Problems?

Health problems can come from genetics, what your dog ate, or the environment. You need to check your pet’s medical history, the food that they eat, and the places they frequent.

There is no concrete evidence that reverse sneezing may be an effect of a dog’s medical history. For other dogs, it’s usually because of their snout shape. In other instances, the cause comes from the environment where the dog is in.

There’s no medical treatment for reverse sneezing. Since it’s usual for dogs, you can try to calm your pet downas a start. Stroke the neck and coax your pet to exhale through their nose. The attack will go away after a few moments.

You can also try covering your pet’s nostril for a moment. Use your hand and do this in a slow manner so your boxer dog doesn’t panic. This act forces the dog to swallow which can remove the irritant. It can then stop the reverse sneezing right at the scene. Experts say that, usually, interventions are not necessary.

Sometimes it also helps when you regularly vacuum your home to prevent allergens or irritants from invading your boxer’s windpipes.

There have been cases of longer durations of reverse sneezing, but so far nothing has been fatal. If you don’t want your dog to reverse sneeze, ask your vet to prescribe decongestant medications.

Anti-inflammatory and anti-histamine medication may work too. It’s not the same for every dog which is why you might want to talk it over with your vet first. Make sure your boxer dog is healthy by giving it healthy food as well.

And Last, Relax and Stay Calm, Your Boxer Dog Can Handle It

Now you know what to do when your boxer dog acts like he is choking. To know more about boxer dogs and other breeds, visit this link!