The dachshund is a popular short-legged breed in the US, according to the American Kennel Club. Moreover, this breed comes in two different sizes namely the standard and the miniature. The standard dachshund is more capable of strenuous physical activity. However, can dachshunds climb stairs? Let’s find out in this article.

What Is the Physique of the Dachshund Built For?

The breed dachshund belongs to the hound group with ancestors that were primarily used for hunting. Most hounds have heightened senses or strong stamina. The dachshund is one of the hounds built for stamina. However, dachshunds can’t sustain prolonged running, leaping or swimming. The energy of a dachshund is mostly for hunting and alerting their owners as watchdogs. The dachshund may climb stairs when necessary. However, multiple trips up and down the stairs several times might be too much for a dachshund to handle.

The long-backed body and short legs of the dachshund are unlike any other breed. This gives the dachshund the breed’s distinction and sometimes the nickname “hotdog”. Even though the physique of the dachshund isn’t for very strenuous activity, they are very smart and vigilant which compensates for their lack in size. In addition, they are also very good watchdogs due to their bark which resembles a big dog. 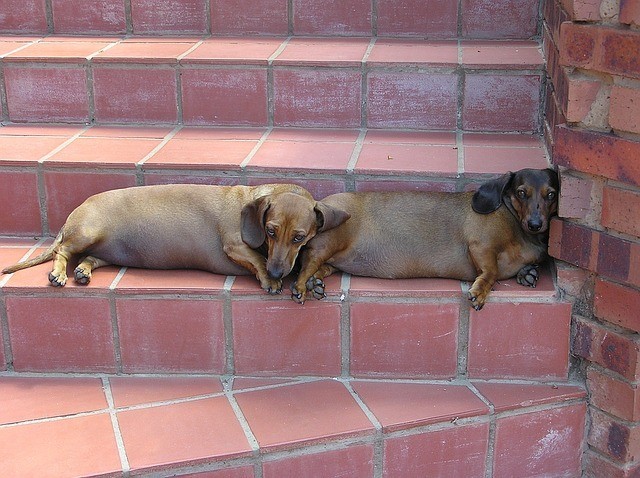 Dachshunds may have short legs and long bodies, but they are fully capable of climbing stairs. However, this might take time for some dachshunds to learn or they might be too afraid to climb or go down the stairs at first. Just like any dog, the dachshund might need some positive reinforcement to convince them to climb the stairs. But, if you have a dachshund puppy, the dachshund’s short legs might make it difficult for your puppy to climb stairs with big steps and might need some help or smaller extra steps.

A full-grown dachshund may no longer find difficulty in climbing stairs. Eventually, climbing stairs becomes a normal activity for some dachshunds living in spaces with more than one floor. Even though dachshunds can climb stairs, they might easily get exhausted if they run up and down the stairs multiple times since their bodies aren’t built for such activities. Even though they are capable of climbing the stairs, it is not recommended to push the physical limits of any dog when it is completely unnecessary.

Can Dachshunds Be Taught to Climb Stairs?

Do the Short Legs of the Dachshund Hinder Their Ability to Climb Stairs?

For dachshund puppies, it might initially be difficult for them to climb stairs with steps that they are unable to reach properly. However, for most dachshunds, climbing stairs can just be a simple task once they learn how to do it. Also, once the dachshunds reach their adult size, it is going to be easier for them to reach the steps of the stairs, so climbing up and down the stairs no longer becomes a problem in adult dogs.

What Are the Common Health Issues of Dachshunds Which May Affect Their Ability to Climb Stairs?

Any dog is susceptible to health problems. That is why it is important to pay a regular visit to your dog’s veterinarian. Some health conditions are asymptomatic at first but can be life-threatening for dogs when left untreated. Dachshunds are smart, vigilant and very active. If there are significant changes in your dachshund’s behavior it might be a sign that there is something wrong with your dog. Here are some health conditions that may prevent your dachshund from climbing the stairs normally:

What Can Prevent Dachshunds From Climbing Stairs?

Dachshund pregnancy may also be a reason for your dachshund to avoid the stairs, especially when the pregnant female dachshund is experiencing discomfort or is near her due date to deliver her puppies. The stairs might be too exhausting for a pregnant female dachshund, so it would probably not opt to climb it. In addition, due to the dachshund’s short legs, the steps of the stairs might hit her belly as she climbs which may lead to further discomfort for your pregnant dog.