Pugs are extremely adorable little dogs, especially with their comical expressions. Even their sneezes are cute as they get confused after the incident. But when your pug can’t stop sneezing, it’s neither adorable nor normal.

Dogs don’t sneeze as much as we humans do. That’s why it can be really troublesome when your dog continuously sneezes.

So, what are the main causes of sneezing in dogs? Should you worry when they can’t stop? Plus, how do you fix this problem?

Why Do Dogs Sneeze?

In a way, it’s the same for dogs. But it doesn’t mean they have allergies, colds, flu, or any health problems. Dogs have a different way of reacting to these problems. Instead of sneezing, dogs often cough as a sign of sickness.

So, what specifically causes sneezing in dogs? Below are the most probable reasons:

Sneezing can be caused when there’s upper airway obstruction. It’s normally due to excess tissue in the upper airway. In humans, this can result in sleep apnea, but dogs react to this by sneezing.

There are many factors that can cause obstruction. It may be due to foreign objects trapped in your dog’s nasal passage. Or it may even be due to polyps or cancer.

However, Brachycephalic Syndrome is the most common upper airway obstruction in pugs. This is found in most breeds that have pushed-in snouts. Besides pugs, boxers and bulldogs experience this as well.

Common symptoms of this syndrome include sneezing, snorting, and snoring. They’re also prone to reverse sneezing.

Nasal mites are almost unavoidable. They dwell in places where your dog loves to put his nose in like the dirt. Once your dog picks them up, they stay in your pug’s nasal passage and call it home.

Basically, these mites are similar to bed bugs or hair lice. The difference is they stay in your dog’s snout and cause sneezing and itching. Your pug may even experience nasal bleeding if the case is severe. 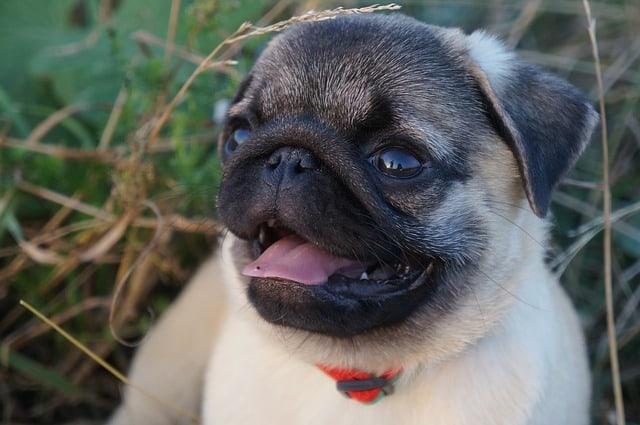 Pugs with nasal mites won’t stop sneezing. It’s an uncomfortable ordeal for your dog. So even when an infestation is inevitable, it’s best you fix it as soon as possible.

Bring your dog to the vet. A swab will be taken for examination to confirm if they do have nasal mites. The vet will then come up with a treatment plan once the results come out positive.

Your pug’s nose is lined with little sensitive hairs just like with yours. When a foreign object is trapped, it can easily trigger sneezing. Even microscopic dust is enough to make your dog sneeze nonstop.

Sneezing helps the body expel these foreign objects, and it does it well. If your dog loves digging through the dirt or sniffing the flowers, sneezing is normal.

Your vacuum may also be the main culprit behind your dog’s non-stop sneezes. Every time you turn it on, specks of dust explode in the air. Your dog will inhale it, and the dust will get trapped in their nasal hairs.

Ensure you clean your vacuum after using it. It’s also best to keep your dog away from it when you’re turning it on.

Certain kinds of allergies can make your dog sneeze. Most of the time, it’s because of pollens and plants, and it’s also seasonal. Be careful around spring and summer as this is the time allergies tend to happen.

Seasonal pollen allergy is easy to diagnose. Besides getting nonstop sneezes during these seasons, there are also other symptoms. They’re likely to chew on their paws with excessive scratching.

Should You Worry About Nonstop Sneezing?

It’s normal to worry about our dogs because they’re unable to speak our language. We don’t know if they’re feeling unwell or if it’s a normal reaction. But while sneezing is actually common, there are times you should feel worried.

Nonstop sneezing may also be an effect of serious health problems. It can be due to kennel cough, dental infections, and fungus. The deadly distemper virus can also cause excessive sneezing.

If you suspect that the cause is more than just dust and allergies, visit the vet. They’ll be able to diagnose the problem and provide your dog with the proper treatment.

Worrying may also be a good thing. It can detect problems early which means your pug has more chances of getting better.

But not all excessive sneezing is bad. Some of them are good.

Your pug may just be overly excited, and they often show this through a sneeze. This is more prevalent in smaller breeds like your pug. If their sneezing is accompanied by happy barking and tail wagging, don’t worry.