Designer dogs or dogs with mixed parentage are getting more popular these days. And why not? These types of dogs are good examples of the best of both worlds.

One of the best combinations is the Pitbull Lab mix. They’re also known as Pitadors or Labrabulls. If you’re curious about what type of dog you’ll get, this article is your ultimate guide. 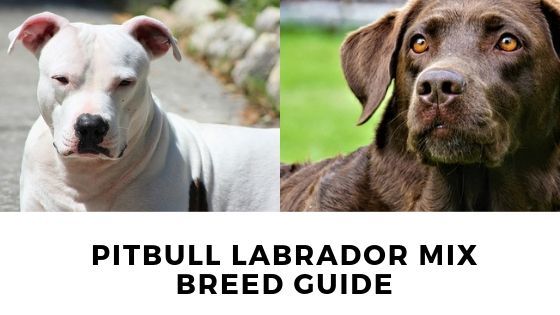 One thing about hybrid dogs is that you can never be too sure about their appearance. It’s uncommon to see 50% Pitbull and 50% Labrador in a Pitbull and Lab mix. Usually, a pup will lean more toward a particular parent.

In general, a pit bull and Lab mix dog has an athletic physique with their wide chests. They often get the broad head of the pit bulls plus the small droopy ears.

Then again, you have to wait until they grow to see what they look like.

A lab pit mix dog is considered a large dog. They often get around the same height and weight as their parents.

On average, Labrabulls reach from 17 to 24 inches. The perfect weight is somewhere between 50 and 90 pounds. You can expect female dogs to be smaller than their male counterparts.

Labrabulls have short and silky coats. It’s common for every Labrabull.

The fun part is knowing what color they will be.

Your best bet is the color of the parents. They may take after the solid colors of the Labrador. But they may also get mixed colors like the pit bull.

You can get black, brown, yellow, white, gray, blue, or even brindle Pitbull and Lab mix dog.

The pit bull Labrador mix dog has an uncertain origin. We can’t be too sure when and where they were first bred. Or if they were bred for some reason.

However, it’s possible that Labrabulls were fairly new like most designer dogs.

Since we can’t pinpoint their exact origin, let’s take a look at the origin of the pit bull and the Labrador.

Pit bull is actually a class of dog, and there are four breeds under it. However, when people say pit bull, they often refer to the American Pit Bull Terrier, which is also the most common parents of these dogs.

These dogs were originally bred from the now-extinct breeds. Those were the Old English Bulldogs and Old English Terriers. They came from the United Kingdom during the late 1800s to early 1900s.

They were bred to achieve the gameness of the Terrier and the strength of the Bulldog for blood sports. They’d be used as bear and bull baits. When that was eliminated, they were then used to fight each other.

Their bloody history is one of the main reasons why they acquired a bad reputation today. In truth, pit bull terriers are sweet and gentle. They’ve succeeded as police and guard dogs and even as therapy dogs.

Labrador Retrievers were employed by fishermen in Newfoundland as duck retrievers. These dogs are comfortable in the water. In fact, they are known as waterdogs.

These dogs have become steadily popular until the early 1800s. When English nobles reached Canada, they grew fond of the dogs. They brought the breed back to their home and soon refined and standardized the breed.

The Kennel Club of England registered the first Lab in 1903. The American Kennel Club followed in 1917. Since then, they have become one of the most loved breeds in America.

Training your pit bull and Lab mix dog is very rewarding. Both parents are highly intelligent so your Labrabull can absorb commands and tricks well. They are also eager to please and willing like the Labrador and pit bull.

Because of this, training your pup won’t be too much of a problem.

Positive reinforcement works best given the nature of its parents. That means you should give them treats whenever they get a trick done. Praising them and their good behavior will also show great results.

As with any dog, make sure you have a firm and gentle hand in training them. Make sure they know you are the boss to avoid stubbornness or losing their focus.

Your Labrabull is not just big—they have high energy levels. This means they will need regular exercise or else they will become more hyperactive. This can be destructive when they have no means of letting it out.

Walking, jogging, or even playing with them for an hour every day will work. You should also make sure they get plenty of mental exercises to keep them sharp.

Pit bulls are often feared because of certain myths and the stigma surrounding them. Any designer dog with a pit bull for a parent will receive some of that.

But don’t fear. Although pit bulls have aggression, any attacks can be avoided with proper training. Most of all, a positive and loving home will ensure they grow to be the sweet dogs that they are.

Like with their appearances, a Lab Pit mix dog’s temperament is unpredictable. They may have a temperament that’s closer to one of their parents.

Labrador retrievers go well with other dogs. They are friendly, sociable, and are very loyal to their family. They will protect their family, especially the kids.

Despite popular belief, pit bulls are very gentle. These dogs are effective nannies to your children. This is due to their patience and gentleness.

They may not like other dogs, but they often work well with cats.

Labrabulls are generally intelligent, friendly, loving, and gentle dogs. Once you have one, you’ll realize they’re perfect pets.

A feeding plan is important so your dog grows healthy.

Pups will need milk from their mother. By the time you give them food, make sure it’s soft enough for them to chew and digest. Feed your pup up to four times a day until their sixth month.

Adult Labrabulls will need two cups of high-quality dry kibble rich in protein. Feed them twice or thrice a day. It’s better to ask your vet for the best feeding schedule.

Apart from quality food, ensure they have access to clean water.

Your pit bull and Lab mix can stay alive from 10 to 14 years. But taking proper care of them and ensuring they’re healthy will extend their life expectancy.

That said, it’s important to be aware of the most common health problems your dog may have:

If either your pit bull or Labrador has an existing health problem, the pups are more likely to get it. Make sure you have your pup checked regularly and to get a pup from a reputable breeder.

Your hybrid is a low to moderate shedder. They’re low-maintenance dogs and will only need brushing at least twice a week. It’s only to keep their coat shiny and smooth.

Bath times are only needed at least three to four times a year or when necessary. You can also bring them to a groomer for an all-around grooming session. This includes clipping their nails.

Additionally, brush their teeth every day to avoid plaque and tartar buildup.

The average litter size for both pit bulls and Labradors is between five and 10 pups. Expect the same number of pups when your pit bull or Labrador gives birth to Labrabull pups.

As much as possible, never take the pups away from their parents for at least three months. They are still in need of their parents.

However, you can start training your dog when they’re still pups.

A Labrabull pup can be bought from $500 to $1500 depending on the breeder. More reputable breeders often have higher prices than others.

If you want to get a pitbull Lab mix for free, you can try the local shelter.

The Labrabull is officially recognized by these breed organizations:

Despite the bad reputation for the pit bull, a Pitbull Lab mix dog is an adorable pet. Just make sure they get the love they deserve.