Cockapoos are small mix breed dogs that have Cocker Spaniel and Poodle parents. They are considered as designer dogs, much like the Labradoodle and Puggle. Because they are a small breed and have medium energy levels, their food consumption varies. Depending on their age, their feeding time will vary as well. So, the question here is: How much should a cockapoo eat and how often should a Cockapoo eat?

How Much Should a Cockapoo Eat? 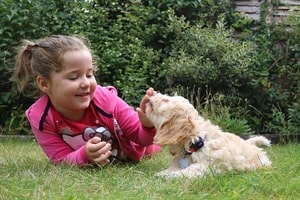 Cockapoo puppies usually breastfeed until they are 8 weeks of age. Puppies who are on a formula diet will continue until 8 weeks of age as well. After that, they will begin to transition to solid or wet puppy food. Transitioning into a different diet takes about seven days. The first feeding should have at least 10% new puppy food and 90% milk. Each day, owners can increase the amount of dog food gradually.

Cockapoo puppies should eat as much as the pack of food suggests. Each brand varies their servings because their ingredients are caloric-based. The amount of dog food for Cockapoos suggested on the pack is dependent on the weight of the puppy, so it is important to weigh them regularly to ensure that they are getting enough food every day.

Once the Cockapoo puppy reaches adulthood – around 9 to 12 months of age – their food intake must be decreased. By adulthood, the Cockapoo will not need as many nutrients as a puppy. If they continue to eat puppy food, they will either become obese or excrete the excess nutrients. That is why it is important to transition to adult dog food at about 6 months of age, which is when they are considered to be young adult dogs.

To know more about the Cockapoo, watch this video:

How Often Should a Cockapoo Eat?

Cockapoo puppies should eat three to four times a day. Simply divide the amount of food suggested in the food pack into several meals. Puppies should eat at a specific time and place so that they will learn how to eat properly. Doing so will help prevent food aggression, teach them discipline, and prevent overfeeding.

Adult Cockapoos, on the other hand, should eat twice a day, preferably after walks. When you feed your adult Cockapoo after a walk, they will be famished and consider food as a reward for a job well done. Feeding your dog on time helps promote a routine. Dogs love routines because they are wired to follow them and maybe even implement it themselves by signaling their need to walk, eat, and train.

Some owners feed their dogs once a day. If that is the case, they can feed their dogs in the morning so that they will have enough energy for the long day ahead. By bedtime, your dog will have used up all their energy and will be able to get a good night’s sleep on time.

Why Feeding Schedules and Frequency Are Important for Your Cockapoo

Cockapoos have a friendly and curious nature. They tend to have medium energy levels, but some Cockapoos can be extremely active. Because of this, they will need an outlet for all that energy. One way to release that energy is by walking or playing fetch. You can also use mental stimulation like training them to do tricks.

All these activities will certainly deplete the energy of your dog, which is why it is important to consider how much and how often they should eat. If your Cockapoo does a lot of activities during the day, they will need to eat the maximum amount of food stated on the dog food packaging. It also means that you should feed them twice a day when they are adults or four times a day when they are puppies.

If your Cockapoo prefers to curl up and snuggle with you, you should consider feeding them the minimum amount of food they are allowed to eat once or twice a day. However, even if they prefer to stay inside, they should take daily walks to ensure that their temperament is controlled.

Dogs who don’t get enough exercise usually manifest unwanted behaviors like chewing on household items, not following commands, peeing and pooping in inappropriate areas, and other actions that can be attributed to lack of physical and mental stimulation.

The same goes for feeding time. If they eat too much, Cockapoos will not learn how to control their food intake. If they don’t eat enough, they will start to eat other items in the house just to feel full. They can also develop coprophagia, a disorder that leads to poop eating due to anxiety, attention-seeking behavior, or not having enough nutrients in the current diet.

So, how often should a Cockapoo eat? As mentioned, they should eat as much as they should at the same time. The frequency will depend on their energy levels. If your Cockapoo isn’t fed enough or does not follow a feeding schedule, they will develop those above behavioral and dietary problems that can affect their overall health.