The English Bulldog Lab mix, also known as the bullador, is a cross between two purebred dogs—the English Bulldog and the Labrador retriever. Both of the parent breeds are highly coveted and rank in the top ten of the American Kennel Club’s Most Popular Dog Breeds list. The bullador is a sweet, gentle, and playful dog that does well with kids, other dogs, and other household pets. 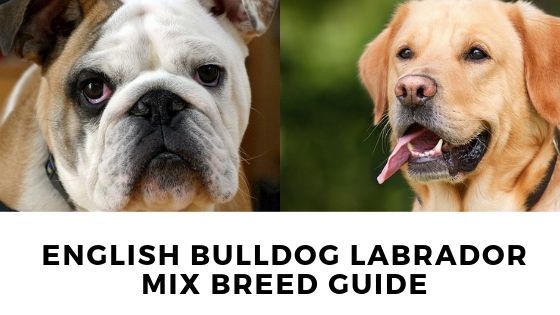 The mix is a medium-sized or large-sized breed. When fully grown, a typical bullador can weigh between 50 and 90 pounds and stand between 20 and 22 inches high. This crossbreed usually takes after the Labrador retriever in body shape and height.

The coat of an English Bulldog and Lab mix is short and waterproof. These dogs can be black, brown, tan, red, yellow, white, or patched.

The Bulldog Lab mix is a first-generation crossbreed. They are “designer dogs” that were bred to produce a cross with the physical characteristics of an English Bulldog and the friendly personality and intelligence of a Labrador retriever.

The exact origin of this crossbreed is uncertain, but the history of its purebred parents are well-known. Labrador retrievers came from Newfoundland, where they accompanied fishermen as early as the 16th century. The English Bulldog originated in 1500s England, where it was used for the cruel sport of bull baiting.

The English bulldog is known for being calm but quite stubborn. Meanwhile, the Labrador retriever is highly intelligent, eager to follow orders, and relatively easy to train. An English Bulldog and Lab mix pup is typically a smart but head-strong dog that responds best to a rewards-based approach.

Both the English Bulldog and the Labrador retriever are loyal, affectionate, and protective. While they thrive on attention from their caregivers, they are not clingy and will be content to nap on the carpet as you go about your business.

Labs are typically more easy-going and less territorial than Bulldogs. The bullador should have both of these traits, but with proper training and socialization, your pup can be taught to be less fearful or aggressive toward strangers and unfamiliar animals.

Because they are a medium- to large-sized pooch, you should give it high-protein, real-meat, grain-free dog food. Both Labs and Bulldogs are known to be voracious eaters, so you need to keep an eye on how much food your bullador is consuming. Grains must be avoided as Bulldogs are prone to bloat.

You need to look out for signs of the conditions that plague the bullador’s parents. These health issues include allergies, cardiovascular problems, obesity, hip and elbow dysplasia, and breathing problems.

The amount of grooming a bullador requires depends on the type of coat he inherited. Generally, you should brush the coat of your pup two to three times a week. However, during shedding season, you need to brush its coat every day.

Bathe your bullador only when he gets dirty or stinky, but trim his nails often to prevent tearing. You also need to clean his ears regularly to prevent wax buildup.

Both Bulldogs and Labs are known for having large litters. Bulladors usually have a litter size of at least four pups. These hybrid puppies need to start obedience training as soon as they can to avoid behavioral issues later in life.

While Labrador retrievers can cost more than $1500, Bulldogs can be bought for as low as $500. The cost of a bullador pup ranges between these two values.

The American Kennel Club does not recognize this mix. However, it is a member of the American Canine Hybrid Club, the Dog Registry of America, and the International Designer Canine Registry.

The English Bulldog Lab mix is a smart and charming companion that will keep you on your toes.