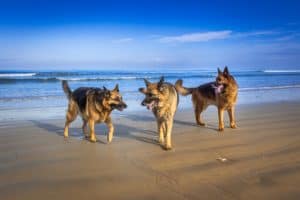 As a long respected breed with a huge amount of utility and many valued traits, German Shepherd breeds have multiple types that are separated by differing histories and personality traits. These different types of German Shepherds can be widely separated by their lineage, so where they come from, and what they were bred for.

So how many different types are there, and what are the different breeds of German Shepherds? Read on to find out, and click here to learn about German Shepard dog food.

With a lineage that only dates back just over 100 years, why is it that German Shepherds are the second most popular dog breed in the west today?

It all comes down to personality and versatility. Intelligent, hard working, dependable and obedient, German Shepherds are an exceptional breed that can be used in almost any working role, as well as having the placidity and protective nature that makes them a favorite amongst families. Originally bred as a working dog, shepherds were originally bred with a focus on work ethic and dependability. It’s this attitude that carries over today into every variety, and it’s this reason why so many people adopted the breed across the world.

How Many Different Types of German Shepherds Are There?

Today, there are five main types of German Shepherd, all separated by geography.

Since the 1970s, Shepherds have been popular in almost all American and Canadian show clubs. Generally, these dogs aren’t bred for their work heritage. Instead, owners are focusing more heavily on conformity to standard looks, as well as a clear, defined side gait. They tend to be better family dogs, with less work ethic and a smaller, less strong musculature that make them ill suited for police and military work. Taller and longer than European breeds, these types of GSD come in a wide variety of colors that tend to be lighter than European varieties, including:

West German show dogs are the most popular type of GSD in Germany itself. West German Shepherds are bred to higher standards and have to conform to hip and elbow health clearances, as well as having to achieve a working title, usually in herding or IPO (protection dog) training. West German dogs tend to have a more standard look amongst the breed, with black and red with a saddle back marking style.

These dogs are supposedly the closest in type to the original shepherds bred by Max von Stephanitz. Dogs of this type are bred for a strong work ethic and enthusiasm, stolid and stable temperament, and physical prowess, although health evaluations may have been less strict, leading to a possibility of more potential health issues down the line. With its heritage, it’s not surprising that this variety makes for an exceptional work dog, though they also make great family pets, as long as you give them the required exercise.

Bred after World War 2 from the remnants of war dogs and controlled by the East German government, these lines tend to have a very uniform and standardized look. With large heads, a heavy bone structure and dark coloration, East German lines are favored because of solid genetic stock, exceptional temperament, and sound personality. Strong, aloof and heavily built, East German breeds make for exceptional guard and work dogs, but can still be good for families if you stay active.

Borne of a number of dogs used to working border patrol and military work, Czech shepherds have exceptional work ethic, as well as being very physically capable. Almost exclusively dark in color, these dogs are bred for heavy workloads, and as such are incredibly agile as well as complete workhorses. Their heritage also makes them incredibly obedient as well as very, very protective over their family.

No matter which of the five different types of German Shepherds you have, you’ve got a hard working, exceptionally intelligent breed with an even temperament. Treated well and trained correctly, any shepherd has the potential to be a perfect family or working animal, but bear in mind that all shepherds have a high need for exercise, so they might not be best suited for less active families.

If you’ve got any questions about what you’ve read, or you believe there’s anything we’ve missed about any of the types of German Shepherd talked about today, feel free to comment below.