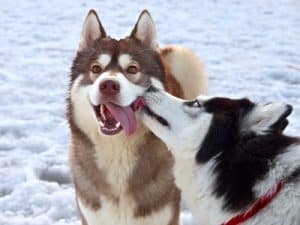 At first glance, and to the untrained eye, a Malamute and a Husky look incredibly similar. But once you start to examine both breeds and get to know them, you realize that past the surface similarities, they’re incredibly different. Carry on reading to find out the difference between Alaskan Malamute and Siberian Husky.

The mascot of the State of Alaska, the Malamute is one of the oldest breeds of sled dogs in the world. It’s used for heavy work, up to and including hunting seals. It’s also the only recognized breed of domestic dog native to North America.

Taller, heavier and larger in every way than Huskies, Malamutes can be twice the size of a purebred Husky. They stand around 23-25” at the shoulder and typically weigh around 75-85lbs, but large males can easily weigh over 100lbs.

One main difference between Husky and Malamute in appearance is that Malamutes have a broad head with wide set, exclusively brown eyes. They are large and muscular, they carry their tails upright over their backs.Regarding personality, Malamutes are incredibly easy going, with a calm personality around their family. However, you need to be careful around other dogs, because Malamutes can be very gender dominant and even aggressive.

As a larger dog, Malamutes are less likely to jump and climb, and more liable to dig around or under fences to escape. And they will try to get away, especially if let off of the leash. With an incredibly high prey drive, Malamutes are just as likely as a Husky to chase, run and hunt. So even though they’re very easy going, if something starts running, expect them to pursue it.

Genetically similar to wolves, Malamutes can have three coat lengths, standard, wooly, and long. Finally, unlike a Husky, Malamutes don’t bark, no matter what is happening around them.

Originating in Siberia, Huskies are far smaller and lighter than Malamutes. And as a dog bred specifically to work in groups and live in packs, they are far more sociable and get on well with other dogs.Purebred Huskies are far smaller and lighter than a Malamute. Standing around 20-23.5” at the shoulder and only weighing around 35-60lbs. A Husky’s tail hangs down but is carried in a sickle shape over their back when they’re alert.

Huskies can have multiple colors of eyes, with brown, blue, green or even heterochromatic (different colored) eyes. So, if you ever see a dog with one blue and one brown eye, it’s a guaranteed way of knowing it’s a Husky.

Excitable, hyperactive and inquisitive, Huskies are like small children in personality and will get into everything they can. They’re also known to be escape artists, and it’s surprising where they can get, digging out under fences and squeezing through tiny holes.

Just like Malamutes, Huskies love to run and love to chase, so don’t ever let them off the leash because they’ll be gone before you know it. Light and lean, Huskies are incredibly fast, far faster than Malamutes, and can run for long distances before getting tired.

How you treat your dog, how you raise it and the life it has, go a huge way towards teaching a dog how to act. Any dog can learn to love other dogs if it’s brought up around them. And dogs, being pack animals, adapt themselves to your family life.

Whether you have a Husky or a Malamute, you’ll agree with me that they’re both exceptional breeds and any family would be lucky to have them. When you’re looking at the difference between Alaskan Malamute and Siberian Husky, there’s one main thing to remember. All dogs are different, and though their breed and genetics can have a big effect on personality and temperament, it’s not the be all and end all.