Labrador retrievers aren’t America’s favorite dog breed for nothing. These dogs are loyal, friendly, outgoing, kind, and sweet. They’re patient and playful with children and tolerate other dogs and strangers.

That’s why it’s a little confusing when people ask if Labs are aggressive. They’re known as the sweetest and one of the least aggressive breeds. But is it possible for a Labrador to attack people?

Can Labrador Retrievers Be Aggressive?

Generally, Labrador retrievers are friendly dogs. They are patient with kids and sweet to their owners. They also tolerate other dogs and animals as well as strangers.

Labs aren’t even the best watchdogs. They’re a little too friendly for the job. But they can sense danger and will bark loudly to alert their owners.

That said, aggressive Labradors seem like a myth. But the question is “can Labs be aggressive?” That’s different from “are Labs aggressive.”

Dogs are a lot like humans. They’re unique in their own ways, and they can be different from the norm. There are definitely aggressive Labradors who attack people.

In fact, research done by pet insurers in the UK can back this up. Labrador retrievers are one of the top breeds that have attacked postmen and delivery drivers. Among them are German shepherds, Staffordshire bull terriers, and Border collies.

Male Labrador retrievers are more likely to be aggressive than females.

It’s also essential to remember that dogs still have a wild side. They’re descendants of wilder animals. It’s possible that this side grows more apparent on some dogs than others.

If the parents are also aggressive, it’s likely that the pup will inherit that temperament.

Are there reasons why they became aggressive? After all, Labrador retrievers are AKC’s number one most popular breed. Their even temperament has gained them the spot.

That’s why it’s likely that your dog’s aggression came from an underlying cause. Listed below are the most possible reasons:

Labrador retrievers have a mouthy habit when they’re still little pups. They like to nip, bite, or chew anything that comes in contact with their mouth. If this habit is not changed, they can bring this into adulthood.

Their playful biting can be harmful since their teeth are more developed. This can cause injuries to you and your family.

Teething Labs will nip and bite. But you have to train them to never bite you or your kids. Instead, give them chew toys that they can demolish when they need to.

If they stop teething and continue this mouthy habit, ensure you intervene and train them. Lab attacks are more common when this habit is ignored.

Labrador retrievers are naturally friendly. But if you coop them inside the house, all alone, they’d grow shy and reactive. Once they see a stranger or another dog, they may feel threatened.

Any dog who feels trapped, threatened, or anxious will react in some way. The most common reaction is aggression. They’d bark, growl, and possibly attack who or whatever makes them feel anxious.

You can fix this easily by ensuring your pup grows with its litter. If that’s impossible, let them out once they’re able to. Walking around the neighborhood can help. This ensures they’re familiar with strangers and other animals.

Bring them to a dog park as well. This is the best way to learn socialization skills.

Rescue dogs are more prone to aggression due to possible traumatic experiences. It’s either they’ve been abandoned, abused, or treated badly. These dogs react aggressively as a way to defend themselves and survive.

Even your Lab can be aggressive when you treat them badly. Punishment like hitting them is a big no as this can trigger such behavior. Punishing them for growling or barking will only intensify the problem.

How to Avoid Dog Aggression

There are several ways to fix your Labrador’s aggression. But the first step is to understand what may be the cause of the problem. Then, fix it according to the reason why they react that way.

Here are things you can do if you want to avoid such behavior:

Your dog might be doing something “unacceptable” to you such as growling. But never punish them by hitting or using any aggressive methods. Instead, be the alpha and tell them “No” or “Stop.”

Teaching them basic commands and obedience training is important. Start when they’re young as they’re more receptive. Use positive reinforcement in their training.

Ensure your dog is sociable by letting them out and letting them meet other dogs. Always be there to monitor every meetup, especially when they’re pups. Don’t deprive them of company. Bring them to a dog park at least once a week or so. 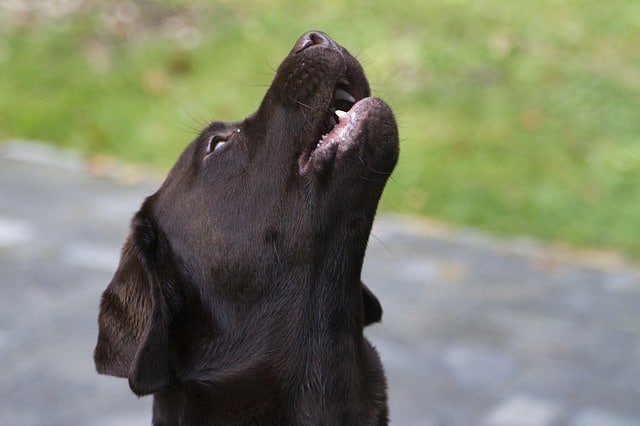 Can Labrador retrievers be aggressive? Yes. But you can easily fix or avoid this problem at the earliest time they show signs of aggression. Train your doggo with love, and it will surely obey you with love.