The Dachshund is one of the popular dog breeds in the US. Moreover, aside from their unique physique, the dachshunds have an immense personality to captivate the hearts of many. But, if you are still planning on getting a Dachshund, you are probably wondering, “Are Dachshunds Smart?” Let’s find out in this article.

In the US, the Dachshund is the 12th most popular dog breed out of 193 registered breed in the American Kennel Club. Moreover, the reason behind the Dachshund’s popularity isn’t only due to their unique physique, but also their lovable personalities as either hunting companions or family dogs.

If you are also planning on getting a cat to live in the same house with your dog, a Dachshund might be the right breed for you. Dachshunds can distinguish friends from foes, so if you introduce a cat properly to a Dachshund, they may live together in peace. Dachshunds and cats may get along well, and this is another good attribute of a Dachshund that you might like.

On the other hand, if you plan to get more than one dog, the Dachshund may also be the best dog for your home. Dachshunds may get along with each other really well. Moreover, if you plan to get other dog breeds to live with your Dachshund, it’s not going to be a problem either, as long as you introduce them to each other properly in a calm manner.

Aside from the lovable personality of the Dachshund, you may also appreciate the boldness and alertness of a Dachshund as a reliable watchdog in your home. They are reserved towards strangers, but Dachshunds may be willing to socialize with people and animals that they recognize as friends. Dachshunds were originally bred to be hunting dogs, so they have notable prey drive that may help control rats and other house pests.

If you live in an apartment with limited space, a Dachshund may also be ideal for your apartment. Moreover, Dachshunds are intelligent and highly adaptable to various living conditions. Just provide enough toys to entertain a Dachshund when you leave it alone.

The Dachshund has plenty of favorable physical and behavioral characteristics that make the Dachshund distinct from other dogs. Also, they can make great family pets for any household willing to care for them. This Dachshund may be a small dog, but it has a big personality to love.

Yes, the Dachshund is a smart breed. Dachshunds are able to execute various commands that make them really good hunting dogs. Moreover, they can also be trained to stop barking on command in case you need them to.

Spunky is probably the best word to describe a Dachshund. They are very determined and courageous despite their small size. Moreover, Dachshunds are often very confident in the things that they are doing which often also exhibits their intelligence.

The Dachshund may exhibit its intelligence upon meeting new people or animals. Initially, the Dachshund is naturally cautious. However, when it gets to befriend the new animal or person, the Dachshund becomes very willing to interact with them in a friendly manner.

The intelligence of the Dachshund makes it a great family dog. Moreover, the Dachshund easily recognizes other family members as part of the pack. Also, if you plan to get another pet, your Dachshund may get along with them well once you introduce it properly to your dog as part of your pack.

The Dachshund may sometimes be too determined to do the things that it wants to do that may be viewed as stubbornness. However, the Dachshund is still very smart. Some Dachshunds may just need a firmer training hand. Nevertheless, the intelligence of the Dachshund is deep within their genetics and once they recognize you as their parent or leader, they can be really obedient with certain commands. 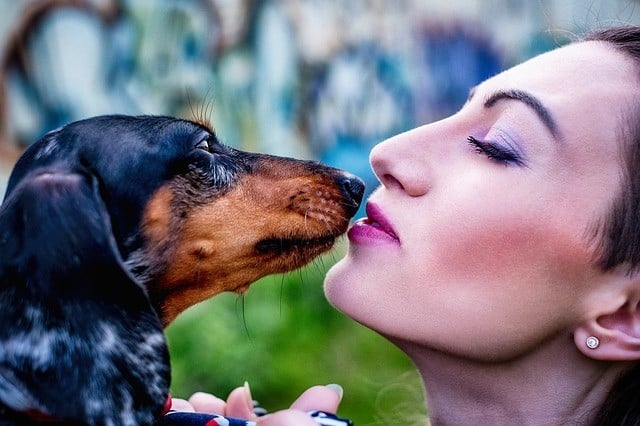 Yes, the Dachshund is a very affectionate breed. That may also be a reason behind their increasing popularity worldwide. Moreover, they never fall short in expressing their love and loyalty to their owners. Dachshunds can be affectionate in many ways. Here are some of the ways that your Dachshund shows its affection towards you:

As humans, we may not always know the meaning of these behaviors, but to Dachshunds, this is their way of showing their affection towards their owners. However, as long as the behavior remains at a normal level, it is probably fine and tolerable. But, you also have to look out for extreme behavior that can be shown in the form of dog separation anxiety and panic attack.

Yes. As a breed originally bred for hunting, Dachshunds are highly trainable with the right reinforcement. But, you may need a firm hand in training them to be either effective hunting dogs or loving family dogs. Once the Dachshund establishes a connection with you as its owner, you may then give positive reinforcement during training. However, if you experience some difficulty in training your Dachshund, you might want to consider getting a training collar.

Are Dachshunds smart? Definitely yes! If you are looking for an intelligent and loving family dog, the Dachshund might be your best bet. Moreover, they never fall short in showing how much they love you. Also, they are highly trainable, so training them might not be a problem with positive reinforcement.