If you have a dog, you’ve been licked. They’ll lick your face and hands first thing in the morning, random times throughout the day, and at night. It’s a sign of their unending affection for you. 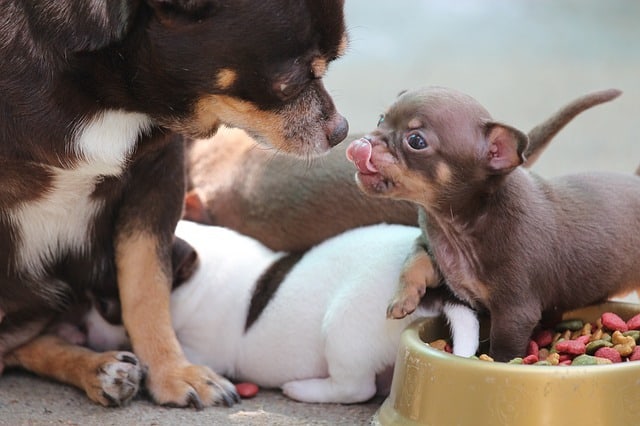 But do you know that licking isn’t always just about affection? It can also be a sign of distress or a deeper and health-related issue.

Why Do Dogs Lick?

The first thing a dog feels is their mother’s tongue. Mommy dogs will lick their litter after birth to clean them, give them heat, and to show her love to her new pups.

As the first thing it feels and the first sign of affection, your pups will acquire this habit. They’d learn to lick their siblings and, soon enough, their human family. For your pups, it’s the most natural thing in the world.

Your Chihuahua may also lick objects. It’s a way for them to explore things aside from smelling them. If they smell something good—like food—they’d lick them to see what it tastes like.

It’s also not surprising if your pooch will keep on licking your ice cream or cake too much. Your pup may also like the taste of your salty skin and will keep licking you every chance they get.

Chihuahuas will also lick other Chihuahuas, and it’s normal.

This behavior is a sign of submission. Those who are lower on the pack’s rank will lick other dog’s mouth as a sign that they know their place. An act as simple as licking can bring harmony and order within a pack.

When is it a problem?

Dogs don’t see anything wrong with licking. But we might.

It can be a nuisance when it’s too much for you. When it does, you can train them to stop the behavior or lessen it. For example, when they start licking you, stand up and leave the room.

Soon enough, your dog will realize that licking will mean you will leave.

You can also let them lick you and then train them to stop when you say the word “Stop.”

Self-licking may also be a problem when it gets too much. Their skin can get irritated with the licking, and they may develop skin problems.

Why Chihuahuas Lick So Much

Dogs lick their owners’ faces so much to show their affection. And if you have a Chihuahua, you’d know they are really sweet. It’s second nature for these dogs to form strong bonds with their human companion.

This can be one of the reasons why your Chihuahua will lick you a lot.

But developing an excessive habit of licking may cause minor problems. It may also be due to a bigger and deeper reason—often health-related.

If you are worried about your pet’s licking habit, read on some of the other reasons why Chihuahuas lick so much.

Dogs will lick and groom themselves when they have nothing to do or when they feel anxious. The act of licking releases endorphins and makes them feel relaxed and comfortable. It can combat the feeling of anxiety, pain, and distress.

In short, it relieves their stress.

But this can be an issue when they chronically lick themselves. Your Chihuahua might be suffering from chronic irritation, boredom, stress, and even pain. This condition is known as canine compulsive disorder.

Your dog will excessively lick themselves to overcome the negative feelings. Health issues that involve too much licking may be bald spots, skin irritations, and hot spots.

Bring your dog to a veterinarian to clearly diagnose the problem. They will then give you tips on how to train your dog to stop excessive licking. Part of the treatment is to give your dog an alternative endorphin-releasing activities.

Pain and allergies also cause too much licking.

If your Chihuahua is having an allergic reaction, they will deal with the discomfort by licking and nibbling themselves. They will not stop unless the root of the problem is dealt with.

Dogs will lick their wounds, and it’s not merely because their saliva has blood-clotting and antibacterial abilities. It’s also to ease the pain. If they feel pain within their bodies, they may lick their paws a little too much.

Chihuahuas have small mouths that are prone to gum and teeth problems. Their way of signaling you that something is wrong is by excessively licking their mouths.

It can be baffling for us to think why Chihuahuas lick so much. But it’s a normal action for dogs.

You can always train them to avoid any excessive licking but observe their actions as well. They don’t speak our language. So it’s up to us to decode their actions and check whether they need medical help.

2 thoughts on “Here’s Why Chihuahuas Lick So Much”