Puppies are the best. But while most of us wish our dogs could stay as pups forever, they won’t. In fact, we should be aware of their growth so we can provide their needs better.

In this case, we’ll be talking about an English bulldog’s growth. Particularly, when can we consider a bully as fully grown? What changes can we expect and what’s the ideal size?

Dogs reach their full growth at different speeds. There are several factors such as overall health and nutrition. But a major factor is their size.

The smaller the breed, the faster they grow. English bulldogs are medium-sized dogs. They can reach their full growth at an average rate. That means they usually stop growing at 12 months.

By the time they celebrate their first birthday, they are considered adults. They have reached the maximum height for the breed.

Yet most bulldogs continue growing until they reach 18 months. Their muscle mass continuously develops beyond their first year.

But there are some cases wherein pups grow slower than the rest. It’s natural and it’s not serious in most cases. Just make sure you track their growth and pay more attention to them.

Most of all, make sure they never weigh above the average to avoid obesity.

When you first see an English bulldog, the first word that comes to mind is thick. They are muscular little fellas with a massive but short-muzzled head. They look heavy and thick-set with their sturdy limbs, wide shoulders, and low-swung body.

Male and female bullies normally have the same ideal height. They should reach 14 or 15 inches at the shoulders.

Despite their shorter height, the ideal weight for male dogs is 50 pounds. Meanwhile, female bullies should weigh 40 pounds.

The English bulldog is registered by the American Kennel Club. Everything stated above is based on AKC’s breed standard.

Here’s an in-depth look on an English bulldog’s growth from newborn pup to adulthood.

Newborn pups are small, even for a thick-set breed as the English bully. The average weight of male dogs is 5 ounces while female dogs weigh 4 ounces. Even when newly born, bulldogs have their distinct wrinkly and flat face.

Newborn pups have their eyes closed and will only sleep and feed. During this time, they still won’t be reacting to any sound. They’ll also need their mom at all times so monitor your dog and ensure she’s feeding all the pups.

As their fourth-week approaches, they will slowly open their eyes and react to sounds. They may also begin squealing to communicate.

Their growth by this time is rapid so you can see changes rather quickly. 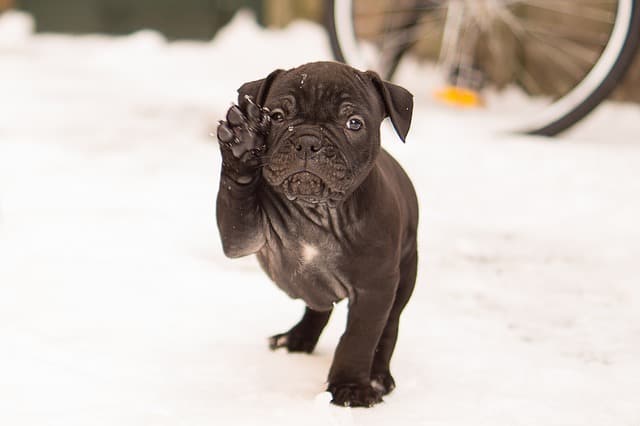 Your pup is more active by now. They can walk on their own and will start exploring new things. As weeks go by, they’d slowly leave the comfort of their mother’s side.

This is also a pup’s weaning period. This is the time they are transitioning to solid food. You can start feeding them dog food – but ensure it’s made especially for pups.

Pups at this age will look more like any pup. They’d be little balls of fur and extremely adorable. So, be careful of handling them as you might get a little too excited and squeeze them tightly.

Although they aren’t muscular yet, they already have the wide built they’re most known for.

Also, let the litter stay and live together. This is important for their socialization skills.

A pup’s leg muscles are still developing at this point. But they’re more active and more likely to explore farther from their moms.

They’ll also likely pee anywhere. Besides lack of potty training, they’re still anxious about their new world. You can start potty training them but be patient as bulldogs can be stubborn.

You can also start letting them out for a short time and give them leash training.

When your pup is 4 months old, their body weight will skyrocket and they’ll be around 30 pounds. Their muscles are developing rapidly and they’ll have more mass than they were younger. Although they don’t achieve their full growth yet, they’re looking more like their adult self.

But after their fourth month, their growth will be slower until they reach adulthood.

As mentioned above, your bulldog will have reached adulthood by turning one. They won’t stop growing until their 18 months old. You may have already trained them simple commands.

Your dog will also need good exercise as they reach adulthood. Maintain their weight by giving them brisk walks and playing with them. 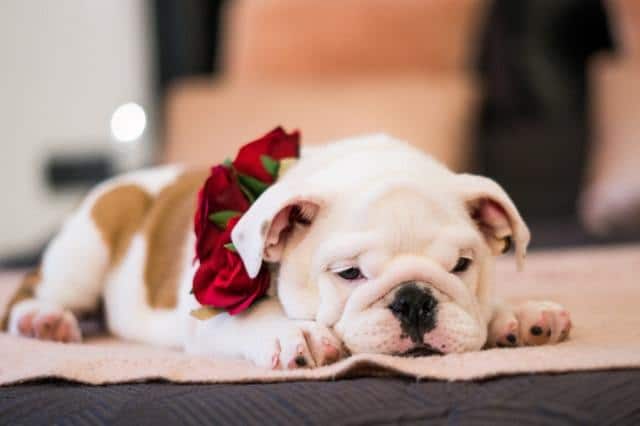 Having witnessed a pup’s birth and see them grow older is an amazing thing. In some ways, they are like our children. Sooner or later, our little English bulldogs will have become seniors. Before we knew it, they have lived beautiful lives.