The pitbull German shepherd mix is an interesting breed. Coming from two dog breeds with a bad reputation, many would probably shy away from this hybrid.

But are all the rumors true? Will this designer dog be as bad as what others say about pit bulls and German shepherds? Maybe we just haven’t given these dogs a chance.

Here’s everything you need to know about the German pit or German sheppit mix. 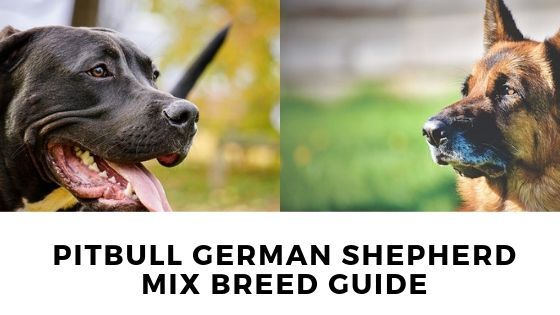 Pitbull German Shepherd mix pups have different physical appearances. Some may look more like pit bulls while others look more like German shepherds.

But it’s fairly common for this hybrid mix to have a head similar to the American pit bull terrier. They have broad heads and short muzzles.

Overall, they have a muscular and strong physique, given that both dogs are very athletic.

These dogs are considered to be fairly large. They can reach a height of 17 to 24 inches at the shoulder. A healthy weight range is between 65 and 90 pounds.

As with most breeds, female dogs tend to be smaller than males.

While they may have an average size and weight, their color and coat can be unpredictable. One pup can lean toward their pit bull side more. Meanwhile, other pups may have stronger German shepherd DNA.

That said, their coat could either be short to medium and normally thick.

As for the color, it’s possible that they will get the solid tan color of the German shepherd. Of course, it will be accompanied by a black saddle. Or they can also get the color of their pit bull side.

Designer dogs such as the German pit are fairly new. But it’s tough to pinpoint exactly when and where they were first bred. It’s also uncertain if they were bred for a purpose or was accidentally discovered.

But we can learn more about this hybrid mix by knowing its parents. Here’s the origin of the American pit bull terrier and the German shepherd.

During the mid-1800s, Brits bred the Old English Bulldog and the Old English Terrier for bull baiting. Pit bulls would be used to chase down bulls and bears. Watchers would then cheer and bet on the animal that survives the longest.

When the sport was banished, people began organizing dog fights as it was easier to manage. They used the same dogs as the fighters in this barbaric blood sports.

Since then, the pit bull’s reputation has gone under the rocks. Many fear the breed. Fortunately, there are many supporters standing strong behind these adorable pets.

The modern German shepherd dogs descended from German herding dogs. Until the 19th century, these dogs vary in type based on which district they came from.

A German cavalry officer by the name of Captain Max von Stephanitz developed the ideal herding dog. This was during the late 1800s. The breeding of various German herding dogs resulted in the ancestors of today’s GSD.

It was in the early 1900s when the breed would grow popular in the United States. Today, the breed is as popular as ever. It has reached American Kennel Club’s second spot for breed popularity.

German shepherd dogs are also popular as military and police dogs. They also work in search and rescue fields.

This designer dog is lucky to have two intelligent dog breeds as parents. As a result, they’re also smart dogs who can learn and absorb tricks and commands easily.

But the thing is, they’re not for new pet owners. The German pit mix is known to have a stubborn streak.

Positive reinforcement will help. Give them treats whenever they do a trick or obey your command. You should also reward their good behavior, especially when they focus.

Additionally, be the alpha. Make sure that your dog understands that you are the pack leader. Don’t be intimidated by these intelligent dogs. You just have to stand strong yet gentle.

Pit bulls and German shepherds are stigmatized as aggressive dogs. Avoid any aggression that can lead to attacks by training them to be sociable.

Do it properly and always ensure the environment is safe. One bad experience could cause trauma or negative behavior.

Both the pit bull and the German shepherds are active dogs. It’s natural for your German pit to be also energetic. To avoid hyperactivity and destructive behavior, give them plenty of exercises.

An hour or 90 minutes of walking or jogging a day can help. They work well with spacious homes and backyards. Because of their energy levels, they won’t fit in apartments and small rooms.

Since these are smart dogs, make sure they also get exercises for their mind. You can give them toys or play with them to stimulate their brain.

Despite the misconception that pit bulls and GSDs are aggressive, this hybrid mix is a sweet and loving dog.

The truth is pitbulls are gentle dogs. They are even good with children and were once known as nanny dogs. They will do anything to protect their little humans.

Meanwhile, German shepherds are heroic dogs. They are loyal and devoted to their families. They’re also best known to be amazing guard dogs.

With proper training, the German pit pups can grow into amazing pets. When introducing them to children, make sure your little kids know the dos and don’ts in handling this breed.

Feeding schedules are important to make sure your dog eats well. Pups are best fed with three cups of pup-only kibbles for three to four times a day. Adult dogs can be fed two cups of high-quality dry dog food two to three times a day.

Choose a dog food with a quality animal protein source as the number one ingredient. Make sure they also have access to clean water at all times.

These dogs often live from 10 to 12 years. But when they are properly taken care of, they can exceed the average lifespan.

It’s also important to get a dog from a reputable breeder because good breeders ensure the parent breeds are both healthy. When one of the parents is sick, the pups are likely going to inherit it.

Here are the most common health issues your dog may get:

Make sure your dog is regularly checked by a veterinarian. Early detection of diseases can help save your dog’s life.

Your dog’s coat is typically thick and dense, especially when they resemble their GSD parent more. They’re also moderate shedders, so be prepared to use the vacuum once a day. You can tame the shedding by brushing their hair regularly.

If they are more like their pit bull side, they are often low-maintenance. They may only need brushing once a week.

But brushing their teeth should be part of a daily routine. This can help ensure their teeth and gums remain healthy.

Clip their nails when necessary. But be sure you know how to use a dog nail clipper.

The average litter size of a pit bull and German shepherd is between seven and 10 puppies. They can have large litters, but some can still have fewer.

Ensure the pups stay with their mothers for at least three months.

A puppy alone can cost $200 to $600. But there are likely other fees when you work with a reputable breeder. There will be an additional $450 to $500 for their accessories and medical needs.

Moreover, you can also check with local shelters to see if you can adopt a dog.

As a designer dog, this breed is not recognized by any major kennel clubs. But the Dog Registry of America, Inc. (DRA) does acknowledge the German pit.

Curious if the Pitbull German Shepherd Mix is a good hybrid? It surely is! Most of all, this breed makes an amazing pet if you care for it properly.