Combining the best of both breeds, German shepherd lab mixes, or Shepradors, can be fantastic family and working dog breeds, as long as you can deal with the downsides.

But that begs the question, what’s a german shepherd lab mix personality like? And how does this dog compare to both of the parent breeds?

About the Parent Breeds

Both parent breeds are strong, hard working and intelligent, so it’s not unusual to expect a Sheprador to share these traits. German Shepherds were originally bred to be smart, inquisitive working dogs, and their popularity speaks to the effectiveness of the breeding program and the effectiveness of the breed. German Shepherds tend to be dominant, protective animals that are incredibly loving to those that they see as theirs.

Labradors, by contrast, were originally bred as gun dogs, to retrieve game after their master had shot it. Because of this, the general traits you’d expect from a dog of this type are a willingness to please, intelligence and obedience.

Now we know about the parents, what about the Sheprador?

However, there’s a lot to be said about training and lifestyle, and a properly socialized and trained pup will almost always grow up to be of even temperament, loving and well behaved.

Taking cues from both parents, shepradors are friendly, playful and loyal.

Generally, they love exercise and play, especially chasing and chewing things like labs, and they’re just as protective and devoted to their families as a GS can be. 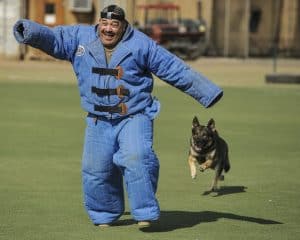 While they love to learn, and love to be out doing interesting things, Shepradors don’t tend to respond well to dominance based training. As large, intelligent dogs, you’re far more likely to get a positive result from a positivity based approach, with rewards to reinforce good behavior.

These dogs require an awful lot of exercise

Shepradors need an active lifestyle, just like their parent breeds. It’s recommended that you walk them for at least an hour a day, preferably twice, as well as playing with them and keeping them occupied at home.

What this means is, if you’re already an established runner, a lab and German shepherd mix might fit right into your lifestyle.

It’s important that you pay attention to this point, which is why it’s number one on our list. Not giving your dog the exercise and attention it needs can lead to depressive and destructive behavior. So, if this amount of physical activity sounds like hell to you, this is not the breed you need. 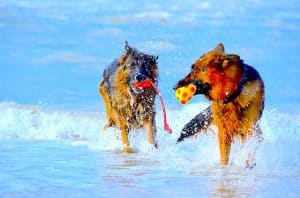 Both parent breeds are built and bred to work. Literally. So a blend of the two is going to have those exact same traits.

This is different to the above point because it’s more to do with home life. Some dogs are content to lie around all day or follow you around the house. Not these. Instead, expect them to be out in the yard, rooting through flower beds and digging under fences, looking for something interesting they can explore and play with.

Why is this? It’s their intelligence. German Shepherds and Labradors are some of the smartest breeds of dog, and a lack of stimulation is hell to them. Imagine sitting in a room doing nothing for hours, without even a TV or smartphone to occupy you. Now imagine being a dog, and not even being able to communicate that you want to do something.

As long as you can cope with the active lifestyle and inquisitiveness, the German Shepherd Lab mix personality is perfectly suited for families and anyone looking for a constant, loving companion.

However, the requirements needed for a dog of this size and activity level are hard, and you’re going to have to make sure that you have both the life and space for a dog like this. As long as you know how to look after and train a dog like this, you’ll have a partner for life.

4 thoughts on “German Shepherd Lab Mix: Personality and Other Must Know Info”