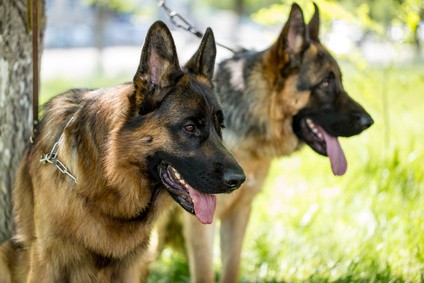 So you’ve decided on a German Shepherd, but now you’re making the last important decision. Which sex do you choose? When you’re talking about a female vs male German shepherd, there’s advantages and disadvantages for both. Keep reading to find out exactly what these differences are, and how they can affect your decision.

The Difference Between Female and Male German Shepherds

Male German shepherds, like most male dogs, are more dominant than females, with females normally being gentler and much friendlier towards both their families and outsiders.

This isn’t fixed in stone, however. A huge majority of a dog’s temperament revolves around how they are brought up. And any pup, male or female, that is regularly exposed to other people and animals and socialized regularly will be more relaxed and calm around them.

Owners have remarked that male GSDs tend to be more aloof and proud than females, but still just as curious and enthusiastic about play and learning. 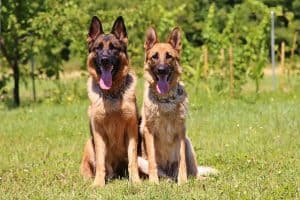 Because male dogs are usually larger than females, they require more food to stay healthy. Of course, nutrition also revolves heavily around lifestyle, and the right quality food can also make a massive difference in general health and happiness.

If you’re talking about the differences between males and females, it’s fair to mention the marking problem. Males can be more territorial and mark a lot more often than females, especially if they are unneutered. 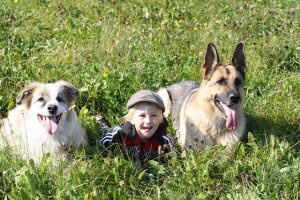 Some people have fears that introducing a German Shepherd into the household around children, especially young children, can be a risky proposition.

As long as you aren’t silly about it, nothing could be further from the truth. The only real risk is that the dogs see themselves as higher in the pecking order than your children, and so try and push them around a bit.

However, when properly trained and introduced to your children, the protective and devoted aspects of a GSD’s personality will flourish. And it’s not unusual to hear stories of a shepherd staying by the crib of a newborn baby all night long, just to make sure that they’re okay.

First, and perhaps most obviously, males tend to be larger and more muscular than females.

Male shepherds tend to be a lot more possessive of things that they think are theirs, like toys and sleeping areas. However, this only tends to be a problem if you spoil your dog and let it think that it’s in charge. A dog that knows its place in the family and is aware that you’re the master won’t have this issue so much.

In the same way, a male can vie for dominance a lot more if it sees you lacking in strong leadership. Again though, this will only ever be a problem if you don’t train your dog correctly and let it run around doing what it wishes.

Males tend to bond with one person in particular and be more territorial over that person. Of course, a male will love the rest of the family, but don’t be surprised if everyone comes to understand the special bond that your male German shepherd has with ‘their person.’Males are usually better from a personal protection standpoint, because of their larger size and tendency to bond with one person.

Again, females are usually smaller than males and less muscular. This is of course relative. There will always be small males and large females, and shepherds are generally large dogs anyway.

Females are less possessive over items and personal effects than males, and less likely to bond strongly with one person. Instead, females tend to love ‘the pack’ and treat your family equally, unless there’s obviously someone who feeds, manages, and trains them.

Females are easier to train and more sensitive than males, and their smaller size, greater agility, and temperament means they’re a better choice for obedience training and events. Females also mature faster than males, which make them easier to train. Females are more tolerant of strangers and children, in general as well. Female dogs go into heat, usually twice a year, unless they are spayed. This normally lasts two or three weeks, and during this time their vaginal secretions will attract male dogs, potentially from miles away.

Always remember that individual temperament and the way a dog is raised speaks far more than genetic and sexual traits. As intelligent, devoted dogs, any dog, female or male German Shepherd, raised well, will be a fantastic addition to any family.

The one corollary to this rule is if you’ve never had a dog before and have no idea how to train one properly and there are no resources in your town or city to help you train your dog.

If this is the case, it’s recommended that you choose a female dog, because of the dominance issues that can arise with a male dog who recognizes a lack of power structures and effective leadership in the household.

Whether you get a female vs male German shepherd, as long as you raise them correctly, you’re going to have a loving friend that will look after you for the rest of your and their lives.

1 thought on “Female vs Male German Shepherd: The Decision”