To anyone who hasn’t owned a chihuahua, they can all look alike. But there are several distinct and defined varieties. They are very different and have specific markers that can make them easy to pick out. 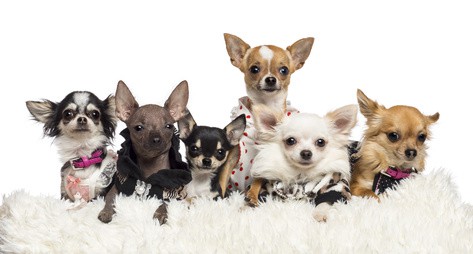 The reason this is important is that all different types of chihuahuas have different physical appearances. Some might have longer hair, while others might have a rounder, shorter head. It can also have a major effect on health, and as a family pet, that’s something that should be a major consideration. Chihuahuas also have different temperaments which can also depend on the sex.

While there is still only one official breed of a chihuahua, read on to find out the different types of chihuahuas that you can find with this breed.

Chihuahuas can be differentiated by the style of their coats. There are two main varieties; the smooth and long coat Chihuahua. 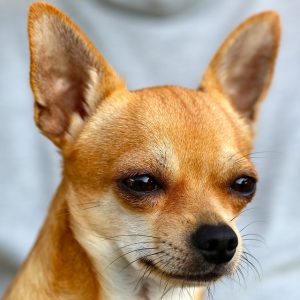 This breed is defined by their short, smooth coat. Shocking, I know. Because it’s got such short, easy to control hair, it sheds less than longer coated breeds and requires less grooming and combing.

However, even short haired chihuahuas can shed quite a lot. So, for people with fur allergies, this is not a recommended breed.

If you’re looking for a lower maintenance breed, which requires less grooming and perhaps less bathing, this is a good choice. Smooth coated Chihuahuas come in various colors and come in both deer-headed and apple-headed varieties. 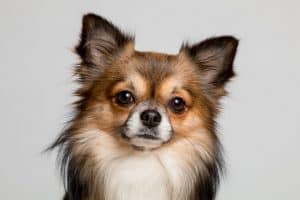 With longer, velvety hair that’s smooth to the touch as well as beautiful to look at, long coat Chihuahuas are a striking breed with a distinctive appearance.

Obviously, they have longer hair than smooth coat Chihuahuas’, and because of this, they require a whole lot more grooming. Daily brushing is probably necessary, and the occasional trim and more frequent baths are standard across this breed.

It’s no surprise that long coated Chihuahuas are a regular choice for competing in dog shows, especially once you realize that their coat can take anywhere up to three years to grow in completely. This breed also comes in apple headed and deer headed varieties.

Chi’s can also be differentiated by the shape of their head. In fact, you can tell which type of Chihuahua you’re looking at with just one glance, especially when you’re used to the different shapes.

Unsurprisingly, this dog gets its name from its head, which is shaped like an apple.

When you imagine a chihuahua, this is probably what comes to mind. They have a round head, large against the body, with wide eyes and a smaller muzzle.

Unfortunately, because of the breeding methods used in the past, dogs of this type can suffer from hydrocephalus, or fluid on the brain. If you’re looking to purchase an apple headed chihuahua, it’s best to check if this condition runs in the family.

In almost all kennel clubs and dog societies, deer headed chihuahuas aren’t accepted as true breeds. However, they have far fewer health problems than apple headed breeds, which makes them much better pets, especially if you have children and other dogs.

Other Varieties of Chihuahuas

A teacup chihuahua is any chi that’s smaller than nine inches tall and weighs less than five pounds once fully grown.

They’re identical in looks and personality to a standard chihuahua, so it’s fair to say that this isn’t a different breed, just a designation amongst chi owners.

Pear headed chihuahuas are generally an undesirable type of Chihuahua that usually happens when an apple headed chi and a deer headed chi breed.

When this happens, it is possible to end up with pups who have heads that are somewhere between an apple headed and deer headed breed, with flat skulls and longer, larger muzzles.

You might also hear about fawn Chihuahuas. This isn’t a specific type of Chihuahua or a different breed. It’s simply a chihuahua that’s colored fawn.

Fawn is a color that you can see a lot amongst chihuahuas and there’s a large variety even amongst this coat coloring. So, if you hear someone talk about fawn Chihuahua, they’re talking about its coat.

While we could go into an exhaustive list, it’s far simpler to say that chihuahuas can be bred with a surprisingly huge variety of other dogs without issue.

If you want a complete list of recognized chihuahua crossbreeds, you can find one here.

While there might only be one real breed of the chihuahua, there’s an awful lot of variety in that one breed out there. Hopefully, now you understand a lot more about this breed, and the different types of chihuahuas that can exist.

No matter what type of Chihuahua you have, or are looking to include in your family, they’re all exceptional pets and loveable companions. Treated well, any Chihuahua will be a valuable addition to your family.