Both the Labrador Retriever and the Dachshund are well-loved breeds, with many families wanting to own either one of them. However, some people prefer a Dachsador or a Dachshund Lab mix pup. It’s a designer dog that has dog lovers’ interests as it came from completely opposite dogs.

So, how would a Dachsador look like? How do they act? Most of all, are they a good addition to the family? Here’s your complete guide to this mix breed. 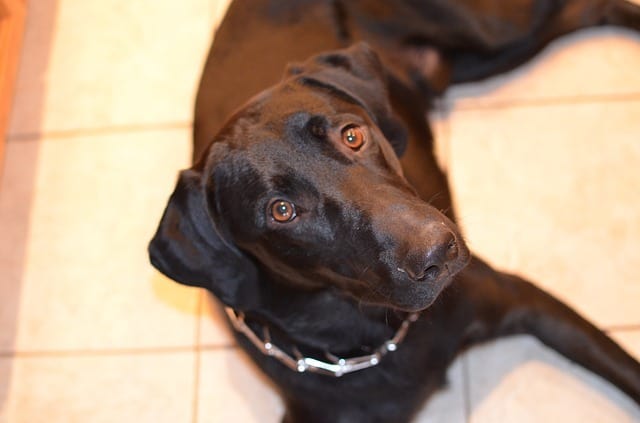 The Dachsador has become a rather interesting and unique hybrid dog, mainly because the physical attributes of the Labrador and the Dachshund is very far apart. With the medium size and athletic build of a Lab, it gets disorienting to imagine it having an offspring with a small, elongated Dachshund.

That makes a Labradord Dachshund mix litter have varying appearances. Some have the length of the Dachshund or the size of the Lab. Some have an interesting mixture of both these breed’s features, looking somewhat awkwardly in the middle of being big and being long.

In the end, puppies from different litters would look different from each other. Sometimes, even pups from the same litter look incredibly varied. It depends on whose DNA is stronger.

That said, there’s a wide range between their minimum height to the maximum as a Dachsador could grow from 15 inches to 25 inches. Meanwhile, the weight range is from 30 pounds to 40 pounds. Most Dachsador dogs also have this muscular physique and longer muzzle from the Dachshund genes.

When it comes to the coat, you can expect a short and straight fur, especially when the Dachshund it was bred from had the same coat. However, they could also have longer fur, depending on the type of coat the Dachshund has. This ranges in color from brown or chocolate brown, black, fawn, or tan.

The Dachsador doesn’t have a long history, unlike its parents. In fact, its exact origin is unknown — even the year or month it was originally bred. However, some breeders believed that it could either have come from Australia or from North America.

It is also believed that the Dachshund Lab mix was bred somewhere along the course of the past two decades when designer dog breeding has become rampant.

Nonetheless, both the Labrador Retriever and the Dachshund have their own fascinating stories of origin.

The Lab was originally a waterdog in Newfoundland and was fishermen’s assistant. They retrieved ducks and other waterfowl for their masters. These dogs would even retrieve the fishes that came off from the trawl.

The Kennel Club first registered them in England in 1903. By 1917, the American Kennel Club would follow suit. Labrador Retrievers would soon become one of the top most popular dog breeds in the world.

Meanwhile, the Dachshund came from Germany, with its name translating to “badger dog.” As the name suggests, these dogs were indeed bred to help fight off badgers. Their long, slender bodies helped them dig deep into a badger’s den and chase them away.

Apart from their usefulness, they also became Germany’s national symbol.

Just like their appearance, your dog’s trainability can also be based on who they are most alike. For example, Labrador Retrievers are intelligent animals and are great when it comes to training. They can learn simple commands and even complicated tricks, especially when there are treats involved.

While Dachshunds are also easy to train and very clever dogs, they have a stubborn streak especially when it comes to potty training.

That said, the mixture of the Dachshunds and Labs could mean that training won’t be as easy as with other designer dogs. They would need consistent guidance from an authoritative figure. That means you need to stop being their friend and become the parent.

This doesn’t mean you should resort to negative approaches, but you do need to instill in them that you are the master of the house. In addition to that, constant training starting from a young age is necessary.

Crate training would help, especially with potty training. Plus, it’s best that you give train them socially at a young age as well.

Your Dachshund Lab mix will require daily exercise, but the length and the activity could depend on their physique as well.

When they have the body of a Labrador Retriever as well as their energy, they will need long walks or an hour of running or jogging. You can play fetch with them as well which also helps their agility and movement.

However, when your dog has the Dachshund’s body, it’s best that their exercise is split into two every day. It shouldn’t also be too tiring and too hardcore for their body. Walking and the occasional jogging would suffice.

The exaggeration of their body means that you need to take extra care of them to avoid back problems.

When it comes to their personalities, both the Lab and the Dachshunds are loyal, friendly, gentle and sweet dogs. That’s exactly what you’re going to get from a Labrador Dachshund mix dog.

Labrador Retrievers are people-pleasers and are always eager to make their family happy. They are obedient dogs and are very good with children, thanks to their gentleness. They also have low aggression.

These small dogs might be small, but they are curious and would often chase anything small and fast — maybe because a part of their DNA was geared towards hunting badgers. They are also alert and is prone to barking especially when they sense strangers.

Dachshunds have also shown a tendency to be aggressive to people if it meant saving their family. When partnered with a Lab’s low aggression, you’re likely going to get a dog who knows how to chill but can be a good protector when needed.

Nonetheless, it is best that you train them to avoid any unruly behaviors.

You might be tempted to free feed your dogs, but don’t! Labs and Dachshunds both tend to gain weight fast, so they are at risk of obesity.

Monitor your dog when they are eating and make sure that you follow a feeding plan. These dogs will need two to three cups of dry dog food every day, split into two or three feedings. Or you can ask your vet for the best suggestion when it comes to how much you should feed them and when.

Buy a dry dog food with safe ingredients and features a balanced source of nutrients. Apart from being protein-packed, make sure that it has vitamins and minerals to help with your dog’s growth.

A Lab’s lifespan falls between 10 to 12 years while Dachshunds tend to live longer at 12 years to 16 years. Of course, their life can be prolonged beyond these numbers as long as you take good care of them and they remain healthy.

Your Dachshund Lab mix breed’s lifespan may fall anywhere between these numbers.

Apart from obesity, there are also other health risks your Dachsador faces. Here are some of the major and minor health issues both the Labrador Retriever and Dachshund often face:

These problems may be scary, but the good thing is that there are tests available these days to help detect these problems early on. This gives your dog a fighting chance at getting better. Plus, you should only buy a Dachsador from a reputable breeder.

Most Dachsadors would inherit the Lab’s coat which is dense, short, straight, and water-repellent. However, they could also inherit their Dachshund parent’s coat which could either be smooth, long-haired, or wire-haired. Their grooming needs may depend on what coat they have.

Nonetheless, they may shed moderately or a little heavier during shedding seasons. It’s best that you brush their coat twice a week. This could also prevent matting and tangling.

Clipping their nails is also important, but you need the proper tool and knowledge of their anatomy. Cutting it too deep could cause injury. If you are unsure, you can always bring them to a professional groomer.

Apart from that, cleaning their ears would be important to avoid dirt accumulation which could lead to ear infections.

Take extra care of your Dachsador pups, especially when they are just a few weeks old. It’s best not to bring them outside until they are at least eight weeks old.

If you’re buying from a breeder, you’re likely going to get them when they are eight to 12 weeks old. Most of the time, they have had their first vaccinations.

The price often varies, often due to several factors such as their age, color, gender, size, and whether they have had medical services. However, the usual price starts at $399 and can go up from there. Reputable breeders would often charge higher than average prices.

If you don’t want to spend that much money, you can visit local shelters and try finding a Dachsador. Not only have you saved money, but you’ve also saved a life.

The Dachshund Lab mix is acknowledged by the Dog Registry of America, Inc. or DRA. Like any other designer dogs, they aren’t registered by the American Kennel Club who only listed purebred dogs.

Overall, getting a Dachshund Lab mix is a good idea when you have a family. They can be good protectors, and their sweet and gentle temperament makes them good companions for your children. But perhaps the most important thing of all is to love them as they will surely love you back for the rest of their lives.