Dog lovers love small lap dogs and toy dogs for a reason. They have the best size for traveling and taking care of. This is the main reason why many are now in love with the Chihuahua Beagle mix. 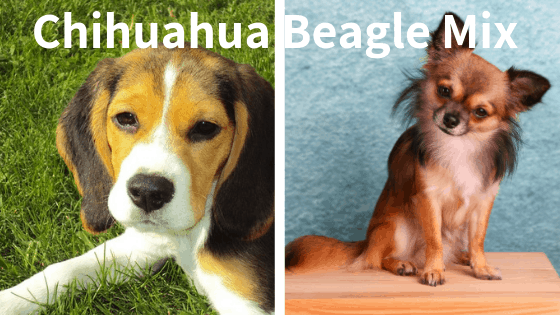 This new designer dog is best known as the Cheagle. It’s the mix between two of the most loved dog breeds around the world – the Chihuahua and the Beagle.

But is the Cheagle the right choice for your family? Here’s your ultimate guide to the Chihuahua Beagle mix breed.

Cheagles are fairly small. But they can also get slightly bigger – closer to a Beagle.

Since Cheagles are designer dogs, their looks can vary. Pups within a litter can even look different from their siblings. Some may look more like Beagles while others look more like Chihuahuas.

Cheagle pups could have floppy or upright ears. However, Beagle’s floppy ears are more common.

Cheagles are normally bigger than a Chihuahua but are smaller than even female Beagles. Male Cheagle dogs are bigger than the female dogs as with the majority of dog breeds.

The Cheagle has a short and smooth coat. You can expect a slightly longer coat if they were mixed with long-haired Chihuahuas. The strands are straight and are fairly shiny.

When it comes to color, they’re normally dominated by a single, solid color. But there are also pups with a mixture of colors and markings.

Common colors (whether solid or combined) include:

Designer dogs are fairly new and like many others, Cheagles may have been bred lately. However, the specifics are still a mystery. We aren’t sure why they were bred and when they were first bred and introduced.

Many dog experts believe that they originated from the USA.

Although we can pinpoint the exact time and place they were bred, we can look back at their parents for more information: the Chihuahua and the Beagle.

The Chihuahua originated from Chihuahua, Mexico – thus its name. Remains of a similar breed, although larger than today’s Chihuahua, is found and dated a thousand years ago. These ancient dogs were named Techichi.

During the 12th century, the Aztecs conquered the Toltecs. They refined the Techihi into smaller and lighter dogs. However, they were deemed the lost treasure of the Aztecs when the Spanish conquistadors invaded them.

The closer relative of today’s Chihuahua was found in the state of Chihuahua. American Kennel Club registered a little Chi known as Beppie in 1908.

Chihuahuas gained even more fame since then especially when the breed appeared in famous Hollywood movies.

Beagles were originally bred to help hunters in England. They are fast and energetic so they were employed to help hunt hares, rabbits, and deer.

Unlike the larger hounds, the Beagles hunted on land. People who are poor and can’t mount a horse can easily catch up to them by foot. That’s why they were known as “foot hound of our country, indigenous to the soil.”

Beagles came to America a few years after the end of Civil War. They were then employed by rabbit hunters in the US.

A Beagle named Blunder was the first AKC-registered Beagle in 1885.

Training your Cheagle puppy is important. However, you might find training a Beagle a little problematic.

They have tireless energy that’s much bigger than their bodies. And since they’re parent breeds are both little balls of energy, it’s no surprise they would be, too.

Beagles tend to bark loudly in a high-pitched voice and may playfully snip you when they get excited. But these playful dogs can also get aggressive. They can seriously bite you when their excitement gets over the edge.

Be authoritative and firm when training them. They have to know you are the master of the house. However, be gentle as much as you can and never resort to negative physical actions.

You can also give them treats whenever they get a basic command easily. Praises will also help.

One thing you should be ready for is the Cheagle mix pup’s energy. As above mentioned, they are extremely energetic and will need daily physical exercise.

Take them for a walk for at least 30 minutes a day. They should be in a comfortable leash or a harness.

Beagle Chihuahua mix dogs are also friendly besides being highly active. They are attention seekers and like their Chihuahua side, eager-to-please. This makes them lovable and sweet pets.

But just like their Chihuahua parents, they can be jealous. These dogs can be aggressive when another dog or person gets too close to you.

Cheagles have the fun-loving and playful side of Beagles. They are curious and will explore places and things they haven’t seen before.

However, Cheagles can have different personalities. Each one is unique as with their appearance.

Your Beagle Chihuahua mix pup needs proper nutrition. Their food should be made for small dogs.

Feed them ¾ to 1 ½ cups of high-quality dry dog food every day. Split these into two or three feedings a day and ensure clean water is accessible. Treating your dog from time to time is acceptable but be wary as they can easily get fat.

Their food should include high-protein source, dietary fibers, and vitamins.

The common life expectancy of a Beagle Chihuahua mix pup is 10 to 14 years. But proper care can help them stay alive longer.

Cheagle pups can inherit any disease their parents had. That’s why you should only use healthy adult dogs for breeding. They are also more susceptible to disease that are common for both Chihuahuas and Beagles.

That said, here are the most common health problems Cheagles can get:

Expect that your Cheagle will shed regularly. But grooming is easy because of their smooth and short coat. Brushing their hair will reduce shedding and can avoid tangling and matting.

Make sure that their ears are cleaned on a regular basis to avoid ear infection. They will also need daily teeth brushing as they’re more prone to dental issues. Most of all, trim their nails when needed.

An average litter is rather large as it consists of 9 Beagle Chihuahua mix pups. The number can differ from one dog to another. You should also check on the pups regularly from birth to see whether they need medical help.

Just as mentioned above, appearance can also vary within a litter and from litter to litter.

If you are thinking of buying a Cheagle pup, it can cost you around $300 to $650 depending on the gender, age, and health of your pup. The breeder will also be a factor. But ensure you only choose reputable breeders to guarantee the safety of your pup.

You will also have to pay for their health and medical expenses, necessities, accessories, training and other expenses besides their buying price. Overall, you will have to pay an average of $1000 to $1500.

However, you can check local animal shelters for Cheagle pups and dogs. Choose high-kill shelters. Adoption is free and you can even save a life.

Beagle Chihuahua mix pups are designer dogs so they are not recognized by the American Kennel Club.

However, these breed organizations help recognize designer breeds like the Cheagle.

In general, a Chihuahua Beagle mix pup is a great pet for families, especially for those with adult members. They are sweet, loyal, and adorable pups. But always remember, love your dog and they will love you back.