Small as they are, Chihuahuas are feisty and has a big personality. Their size has never been a problem for them. They’ll get what they want and won’t back down in any confrontation.

But are Chihuahuas aggressive? Is it in their nature or is it the effect of how they were treated? If your dog has aggression, can it be fixed?

Chihuahuas are brave dogs. They can protect their families against threats. If they have to fight, they won’t say no regardless of their enemy’s size.

But your dog’s bravery and bold attitude may be a problem. Chihuahuas can develop what is known as the “small dog syndrome.” This is the given name to the collection of behaviors that small dogs exhibit.

Normally, the small dog syndrome is the effect of overcoming their small size. The behaviors vary, but aggression is one of the most well-known. Your Chihuahua will start snapping and lunging at anything that they believe is a threat.

The small dog syndrome also includes growling and barking at people. They’ll growl at strangers even when they’re simply passing by.

Worse of all, your dog may attack and bite other people. Chihuahuas are seen as aggressive because of their tendency to have the small dog syndrome. In fact, Chis are reported as more aggressive than pit bulls.

Other Behaviors Included in the Small Dog Syndrome

Here are other signs of the small dog syndrome:

Are All Chihuahuas Aggressive?

Most Chihuahuas do get the small dog syndrome. But it doesn’t mean every Chihuahua will do. Yours may not feel the need to be aggressive. The pup you’re going to get won’t necessarily become one.

They’re more at risk compared to other small dogs. That may be because their temperament is bold to begin with.

The way you treat your Chihuahua may also play a huge role in their aggression. Ultimately, it also helps avoid the development of small dog syndrome.

Smaller dogs tend to get away with behaviors included in the syndrome’s definition. For example, jumping on you and other people seems acceptable. The same goes for running and being excited.

If it’s a bigger dog that does these actions, they are often scolded.

Soon enough, your little pooch will realize it’s far smaller than the bigger dogs. They will feel like they’re being treated differently because of their size. Your dog will soon feel a need to dominate in order to gain respect.

It will start with disobedience and reluctance. As you continue to ignore these behaviors, your dog will be more aggressive.

Can Health Make Your Dog Aggressive?

Apart from the small dog syndrome, your Chihuahua’s aggression may be caused by pain. It’s more probable when your dog is normally placid and peaceful. If they showed aggressive behavior all of a sudden, be on the lookout for injuries.

For example, you’ve picked up your Chi and it yelped and snapped at you. It may be because they were in pain. A common reaction to fear and pain is snapping and aggression. Your dog is only protecting itself from further discomfort.

Other serious health problems like seizures and brain damage may cause aggression. Hypothyroidism and low calcium levels of nursing dogs can also do the same.

Bring your dog to a vet first before a pet behaviorist. They can rule out health problems as the cause of aggressive behaviors.

How to Avoid Dog Aggression

Dog aggression can be avoided with proper treatment of your dog. Once you have a Chihuahua, you have to be more careful about how you treat them.

Below are some of our tips to avoid aggression in Chihuahuas:

Set rules around the house with each and every dog you have. Include your Chihuahua in these rules, and never exempt them because of their size.

Most of all, be the leader of the pack. If your Chi becomes aggressive or disobedient, they’ll feel like they’re the alpha. Assert your position as the authority in the house. While you need to be extra firm, you don’t have to be harsh and mean.

Simple rules like not allowing them in the bed can help.

We do it unknowingly, but most of us do reward bad behavior. For example, your Chihuahua snaps at a visitor. You pick them up and scratch their head because you think it can calm them down.

But your dog actually thinks you’re rewarding them for snapping at a stranger.

If they start being aggressive, remove them from the room. You can also put them in their crate until they stop growling. Ignore their behavior and never punish them for their behavior. 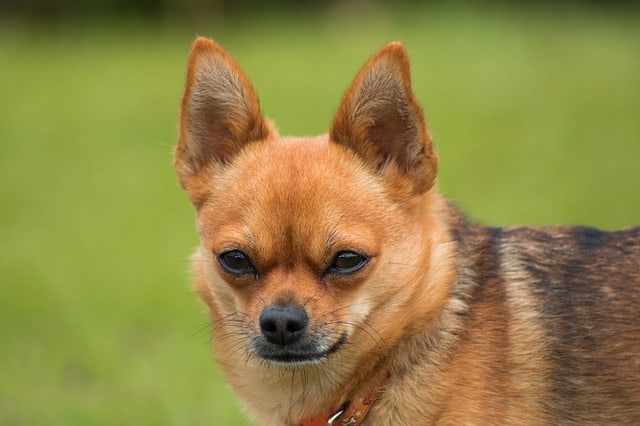 Are Chihuahuas aggressive? They can be, but you can train them not to become one. Most of all, never let them feel special or different because of their size.